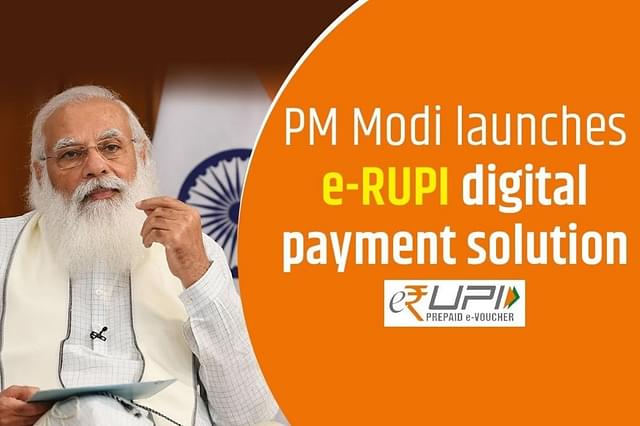 e-RUPI is India’s first step towards having a digital currency. Prime Minister Narendra Modi introduced e-RUPI, a person and purpose-specific digital payment system, at 4:30 pm today (Monday, August 2) via a virtual event. The Prime Minister’s Office took several initiatives in recent years to guarantee that benefits reach the intended beneficiaries. The notion of the electronic voucher is another step in the same direction, furthering the objective of good government. Let’s take a closer look at it:

What is the function of e-RUPI?

e-RUPI is a cashless and contactless method for digital payments. It consists of a QR code or SMS-string based e-voucher issued to the cellphone of a recipient. The utility of the voucher is similar to a gift card. It is redeemable at the service provider without a card, digital payment app, or Internet banking access. It essentially connects the service sponsor with the beneficiaries without the need for a physical link.

What’s the purpose of e-RUPI?

In a statement, the administration claimed that e-RUPI is a “revolutionary step” toward assuring leak-proof delivery of social services to the general public. It can also be utilised to offer services under medication and nutritional support schemes, maternal and child welfare schemes, tuberculosis eradication programmes, drugs and diagnostics, and other schemes such as the Ayushman Bharat Pradhan Mantri Jan Arogya Yojana, fertiliser subsidies, and so on. Furthermore, the Prime Minister’s Office stated that the commercial sector might adopt this model for employee welfare and CSR activities.

The National Health Authority (NHA) claims that the contactless e-RUPI is simple, safe, and secure since it keeps beneficiary information private. Furthermore, according to NHA, the transaction procedure using the voucher is significantly speedier. It’s also trustworthy because the needed amount is already on the voucher.

Is e-RUPI going to be fruitful in India?

The Reserve Bank of India (RBI) has highlighted why digital currencies are anticipated to fare well in India, citing an increase in digital payments, the growing popularity of cryptocurrencies like Bitcoin and Ethereum, and a high currency to GDP ratio reasons. However, it is still early days for digital currencies and requires much improvement before becoming a big success.

The crypto market is experiencing a correction as the EU considers...

Vladimir Tenev, The CEO of Robinhood explains how DOGE might become...

The SEC is pursuing NFTs and has issued subpoenas to various...