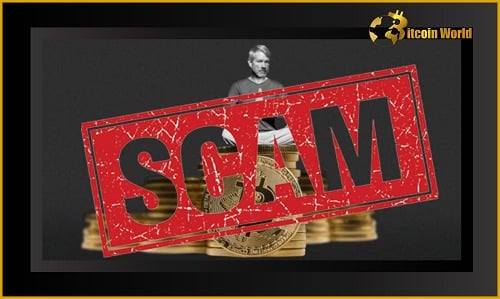 “this scam receive the single largest payment ever to a fake giveaway.”

“We suspect this payment was made through a Coinbase address,” says the report.
So says the company, which is known for tracking large-scale bitcoin transactions.

The theft took place on this website and on YouTube, according to the report, both of which are “proven” scam venues used by con artists to mimic Saylor.

The YouTube channel has subsequently been deactivated, and visiting the website now results in an error message.

According to a payment record, the 26.4 BTC was sent to the primary fraud address in five transactions. At current market prices, the loot is worth $1.14 million.

Scamming with bitcoin is a rife business.

The giveaway scam impersonates celebrities like Michael Saylor in order to dupe others into transferring bitcoin to them. They offer to quadruple the cryptocurrency sent by investors – the giveaway – but instead take the money.

MicroStrategy’s CEO, Saylor, has long been a proponent of bitcoin. His corporation has purchased 124,391 bitcoins since August 2020, the largest ownership of any publicly traded entity. The total value of the holdings is $5.39 billion.

So, in response to the Whale Alert announcement, Saylor says:

“[At least] 489 of these scams were launched on YouTube last week. We report them every 15 minutes and they are taken down after a few hours, but the scammers just launch more.”

Saylor is the latest victim of a phony giveaway. Someone sent almost 3 BTC ($179,000) to a different giveaway impersonating the MicroStrategy CEO in November.

The South Korean Crypto community has to adapt to a new...

Binance Fires Back at Reuters, Claiming That Its Report On Data...

Ethereum 2.0 On Verge Of Completing Test