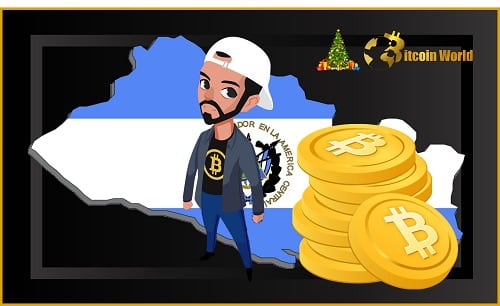 El Salvador, the first country in the world to make Bitcoin (BTC) official tender, is already reaping the rewards. President Nayib Bukele announced the construction of a new National Stadium after unveiling new hospitals and schools with BTC earnings. Before showcasing the new modern stadium, Bukele foreshadowed the announcement a few hours before.

The president announced that work on the new infrastructure, which will begin next year, will begin to replace the current stadium, which is 30 years old. It would have a total seating capacity of 50,000, which would comply with the new Fifa regulations. The stadium will be constructed in collaboration with China, according to Bukele, and will serve as a “model of goodwill between the peoples of China and El Salvador.”

El Salvador has experienced a series of changes since adopting Bitcoin official cash in September, and despite warnings from the World Bank and the International Monetary Fund (IMF), the small Central American country has proven them wrong.

President Bukele made a joke at the United States in the run-up to the announcement of a new national stadium. Then, stating, “Who is your friend?”.

Also, Bukele was referring to the suspicious press and politicians in the United States. Of course, who continue to call El Salvador’s government a “dictatorship,” mostly due to the acceptance of Bitcoin.

The Western media and governments have frequently cited the wave of protests in El Salvador. That’s, following the adoption of the BTC. Then, stating that the decision was made unilaterally by the President without regard for public opinion. Bukele, on the other hand, has claimed that the opposition is orchestrating the majority of the protests. Then, and that actual people are benefiting from Bitcoin.

FDIC To Hire Legal Counsel With Fintech And Blockchain Expertise

SashimiSwap: All You Need To Know About SushiSwap Upgrade

A new Tennessee bill calls for the state to invest in...

The city of Lugano in Switzerland has made Bitcoin and Tether...

A hacker stole $2 million worth of MATIC tokens