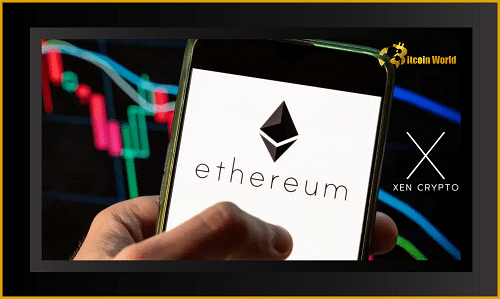 A new project named XEN Crypto has nearly taken half of Ethereum’s block space, which is resulting in a decrease in network issuance and an increase in gas pricing.

As a result, beginning October 8 the supply of Ethereum has started decreasing. According to the Ultrasound.Money dashboard, the asset has turned deflationary, at least temporarily, with a supply growth of -0.41%.

More than 1,300 ETH, totaling almost $1.7 million, have been burned in the last day due to XEN Crypto.

One of the first Google employees to work on cloud infrastructure, Jack Levin, is a supporter of the “Fair Crypto Foundation,” which launched the XEN project. With a token that has a zero supply at launch and has no pre-mint, CEX listings, admin keys, or immutable contracts, Ethos seeks to empower the person.

It has certain Ponzi-like characteristics, according to “Foobar,” who said that it “copies a couple of HEX-like mechanics, but the main thing is that an APY exists.”

The first principles of cryptocurrency are self-custody, transparency, trust through consensus, and permissionless value exchange without counterparty risk. XEN, which launched on October 8, can be claimed, minted, or staked.

Since genesis over the weekend, there have been 369,515 active minters, according to the XEN Network dashboard. There are 174 million tokens in circulation, and staking them will yield a 20% annual percentage yield. Although there is no cost associated with minting, gas prices are rising as a result of the increased demand for this new currency.

Regarding the impact on Ethereum, Levin stated that it was positive, but possibly not for individuals who must now pay more for their transactions.

The token’s price spiked to $1 shortly after its inception, but Coinmarketcap, which has only recently published it, reports that it has since dropped to $0.0032.

At the time, it can only be traded on Uniswap, where there is very little liquidity, and the discussion has already raised concerns that it might be a fraud. If the newest cryptocurrency hot cake ends up being just another scam, only time will tell.

Huobi Global, a crypto exchange, announced its advisory board