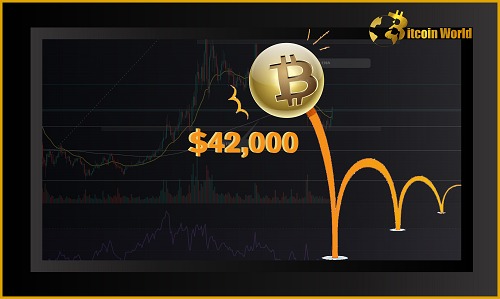 Bitcoin (BTC) has recovered from its important support levels near $40,000 after a shaky start to the week. Bitcoin is currently trading 0.54 percent higher at $42,192, with a market capitalization of $797 billion as of press time.

Over the course of this time, Bitcoin has simply been repeating its previous performances. Lark Davis, a well-known crypto expert, writes

“Bitcoin peaked out at -42.5% under the previous high yesterday.”
“For reference The mid year 2021 mini bear was -55% at bottom.”
“Nothing out of the ordinary for BTC, although likely terrifying for new investors.”

Furthermore, the Bitcoin RSI levels were plainly pointing out that we were in oversold territory on the daily chart on Monday. When we look at the historical chart, we can see that Bitcoin has reached exact support for the first time in September 2021.

Bitcoin has more negative support at roughly $37.5K levels (red circle). Even Galaxy Digital CEO Mike Novogratz anticipated that Bitcoin would hit $38,000 as a bottom, and that this is where institutional investors will most likely enter the market.

The early excitement can be held as long as the 50-day and 200-day Moving Averages are reclaimed to confirm the uptrend.

On Wednesday, all eyes will be on the United States, which will release its inflation figures ahead of the week.

If inflation figures come in higher than projected, the chances of a significant rebound will be harmed much more.

Adidas Now In Partnership With Coinbase For Massive Project

According to the Finder’s survey results, 56% of Australians are not...

Sometimes it’s best to sit calm doing nothing until your crypto...

Bitcoin inflows to all exchanges hit a one-year high, with massive...

Although a record 1.3 billion SHIB were burned, the price of...