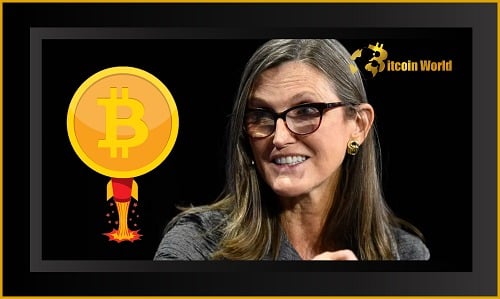 At the Bitcoin 2022 conference in Miami, Florida, Cathie Wood reiterated her favorable outlook on bitcoin.

In a presentation on Thursday, the CEO of Ark Invest predicted that the cryptocurrency will reach $1 million by 2030.

“We believe bitcoin has only just begun,” she tells CNBC. “Institutions are only now catching up to individuals in terms of BTC adoption,” Wood notes.

BTC prices have dipped below $43,000 on many occasions in recent weeks, and have since failed to make major advances.

According to Coingecko data, the world’s top digital currency fell to $42,534.90 on Saturday, down 8.1 percent in the previous seven days.

“Bitcoin’s price target for 2030 is greater than a million dollars per bitcoin,” Wood stated.

During her Miami presentation, Wood relayed the high-level forecast from her company’s Big Ideas 2022 study. So, The cryptocurrency’s lofty price target was contained by this.

The world’s greatest gathering of crypto intellectuals and entrepreneurs, Bitcoin 2022 Miami, is taking place in Miami, Florida. It will be in the Miami Beach Convention Center from April 6 to 9 and has already drawn over 35,000 registrants and over 7 million livestream viewers from all over the world.

Bitcoin, according to Wood, is the first open-source, private digital rules-based monetary system in the world.

It’s a really huge notion, the investor says during her “The Future is Bright” conference, which she co-hosted with MicroStrategy CEO Michael Saylor, another prominent proponent of cryptocurrency.

As Bitcoin drops to a 17-day low, the cryptocurrency market cap falls below $2 trillion