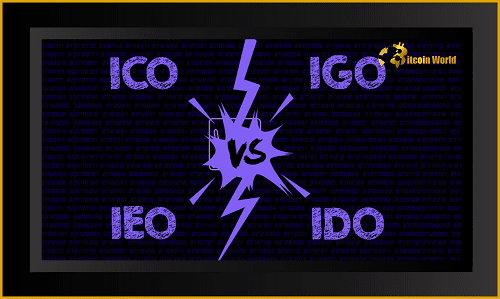 The cryptocurrency world offers a variety of ways to raise money. Initial Coin Offering (ICO), Initial Exchange Offering (IEO), and Initial DEX Offering (IDO) are some of the more well-known types. Although they are all similar forms of crowdfunding, they operate somewhat differently.

The first method of cryptocurrency funding was the Initial Coin Offering (ICO). It enables teams working on blockchain-based projects to raise money using cryptocurrency. Ethereum first employed the ICO method in 2014, and it remained a very popular form of crowdfunding up until the beginning of 2018. Events like ICOs can provide a practical means for projects to obtain funding during their initial stages of development.

The main distinction between an Initial Exchange Offering (IEO) and the other offerings is that an IEO is hosted by a cryptocurrency exchange rather by the project team directly. Both the initiative and IEO participants can gain from partnerships with trustworthy cryptocurrency exchanges. Before being hosted on an exchange, the projects typically have to undergo a stringent vetting process. The IEO project team can expand its user base across the exchange by doing so. A well-known illustration of an IEO platform is the Binance Launchpad.

Initial Dex Offering (IDO) is a decentralized exchange’s host for an ICO (DEX). IDOs were developed to address the flaws in the ICO and IEO models. For instance, it often costs less for projects to get listed compared to IEOs because the project’s token is launched on a DEX. Additionally, IDOs offer quick token liquidity, allowing tokens to be listed virtually immediately after IDO completion.

IDOs don’t always go through a rigorous due diligence procedure, though, because they run on DEXes. Due to the possibility that some IDO projects may be of inferior quality or have a dubious reputation, this could raise total risks.

Additionally, you should exercise caution when dealing with IDOs because many of them ended up being frauds that stole money from investors.