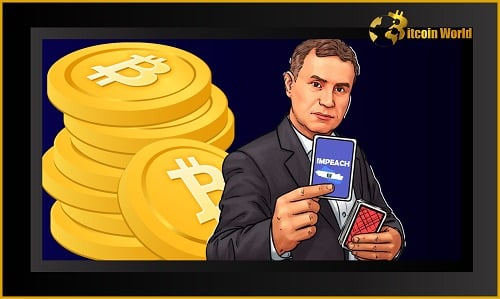 Nobel Laureate Nouriel Roubini has increased his criticism of El Salvador President Nayib Bukele, suggesting that he should be impeached for “bankrupting” the country with his Bitcoin gamble.

El Salvador’s sovereign credit rating was cut by Moody’s earlier this month, citing fears that the country’s bold Bitcoin gamble may prevent it from obtaining a much-needed $1.3 billion loan from the International Monetary Fund (IMF).

El Salvador’s fiscal profile would only worsen if the government increased its exposure to Bitcoin. That’s, according to Moody’s analyst Jaime Reusche.

If it rises significantly, the issuer’s repayment capabilities and fiscal profile will be jeopardized even more.

El Salvador owns dollar-denominated bonds worth $800 million that are due in January 2023. The yield on those bonds soared to 34 percent earlier this month due to debt concerns and uncertainty about Bitcoin. They had the poorest performance in the entire world in 2021.

El Salvador, which has some of the world’s most distressed sovereign debt, is planning to issue Bitcoin-denominated “volcano bonds”. That’s, in collaboration with blockchain pioneer Blockstream and iFinex, the parent company of Tether and Bitfinex. A portion of the monies received will be utilized to build “Bitcoin City,” a libertarian utopia.

Also, Bukele received backlash amid a significant Bitcoin sell-off on Saturday, according to U.Today. The “coolest dictator” is said to have lost over $20 million by buying Bitcoin using the country’s treasury funds.

Despite the backlash, the “CEO of El Salvador” resumed his Bitcoin buying spree.

The Luna Foundation Guard has raised $1 billion for the Bitcoin...

A surprise behind motivational for Presidential Bid reveals by Brock Pierce

PewDiePie To Give Away Crypto Valuables: Here’s How