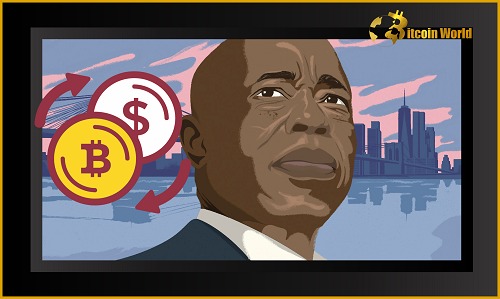 Satoshi Street is once again a massacre, with Bitcoin and Ethereum both losing over 8% of their value. New York City Mayor Eric Adams, on the other hand, is planning to buy the Bitcoin dip later today.

Adams’ payment will be converted from US dollars to Bitcoin and Ethereum, as previously reported. The funds will be converted through Coinbase, the country’s largest cryptocurrency exchange. The mayor of New York City writes in a news statement issued by his office:

“New York is the center of the world, and we want it to be the center of cryptocurrency and other financial innovations.”
” Being on the forefront of such innovation will help us create jobs, improve our economy,”
” and continue to be a magnet for talent from all over the globe.”

In November 2021, Eric Adams was elected Mayor of New York City. Adams has been a pro-Bitcoin and pro-crypto supporter since the beginning. Following his election victory, Adams set the precedent by stating that he would be changing his first paycheck into cryptocurrency.

Coincidentally, the first paycheck arrives at a time when Bitcoin and the larger crypto market are experiencing a significant correction. As a result, Adams will be packing his luggage to the brim. Adams stated earlier this month that Bitcoin $50,000 is a great purchasing opportunity. Bitcoin, for example, is already trading at a 20% discount to $50K levels.

Following Miami’s lead, the mayor of New York City announced the launch of NYCCoin, the city’s native cryptocurrency, which is now available for mining.

Other politicians in the United States, such as Cynthia Lummis, have shown support for cryptocurrency and have invested in top assets such as Bitcoin and Ethereum.
Related Posts – Ex-SEC Chair, Jay Clayton Believes Cryptocurrency Industry Is For Long Haul

Bitcoin Rejection At $52,000 Crypto Predictor Says the Worst Dip Is...

ITSMYNE is launching its IDO on CardStarter on 1st November