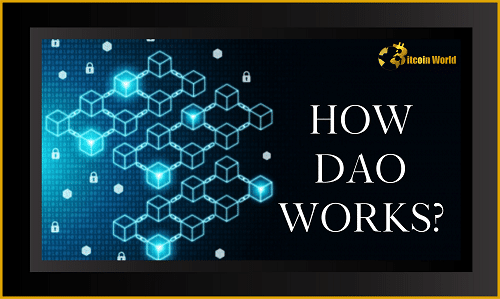 A DAO is typically managed by a group of stakeholders who are motivated to participate in running the organization by a common objective and frequently by an additional cryptoeconomic mechanism. A core group of community developers write the guidelines for a DAO into the smart contracts that outline the fundamental principles for how the DAO operates.

For instance, a code may be activated to burn a specific number of reserve tokens held in the DAO’s custody or to distribute incentives to token holders based on the outcome of a member vote.

A DAO’s rules and transaction logs are stored openly on the blockchain. Typically, member proposals are how decisions are made in a DAO. A proposal is automatically implemented if a majority of the stakeholders agree with it or if it complies with another predetermined rule set.

The amount of governance tokens that a DAO member owns can occasionally affect how much voting power they have. A member who owns 100 tokens, for instance, will have twice as many votes as a member who owns 50 tokens.

The rationale behind this practice is that people who have a greater financial stake in the DAO are more driven to act in the organization’s best interests.

Some DAOs also have treasuries where their members can store tokens they can sell for cash. How the funds are used can be decided by community vote.

Although a DAO functions more decentralizedly in many key ways than a corporation or a nation-state, it is similar to both in some ways. While traditional organizations are structured hierarchically and decisions are often relayed via multiple layers of bureaucracy, DAOs do away with hierarchy. Instead, DAOs use economic mechanisms to balance the organization’s and its members’ interests.

Members of a DAO are not legally obligated to each other, but rather by a shared objective and network incentives connected to the consensus rules. These guidelines are included in the organization’s open-source management software and are totally transparent. DAOs operate without borders, but they might be bound by rules depending on the laws of the specific country or region they work with.

A DAO is governed by a community of participants once it has been deployed; it cannot be controlled by a single entity. The governance rules outlined in the protocol should direct actors toward the best result for the network if they are properly designed.

DAOs can be thought of as an open-source operating system for collaboration. This system permits individuals and institutions to work toward shared goals without needing to know or trust each other.