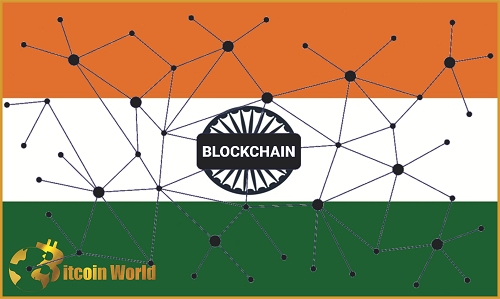 India recently rolls out a five-year roadmap for adopting blockchain technology in the country. Also, it’s termed ‘National Blockchain Strategy,’ and it focuses on promoting blockchain in many sectors of the economy. Then, it targets further closer partnership between the private sector and the government.

More so, The 52-page document by India of Electronics & Information Technology (MeitY) is actually a new version of earlier one this year.

Furthermore, The ministry rolls out India’s vision on building a national blockchain platform. Which will actively benefit 44 sectors of the economy. Also, it’s working on a national blockchain framework, which claims that a
“geographically distributed national level shared infrastructure with nodes spread across India”
Is of course, important for the country to enjoy the benefits of blockchain technology fully.

Additionally, The India central government plans to use this national infrastructure and bring blockchain-as-a-service (BaaS). Of course, this relates with the 44 sectors it thinks will benefit from blockchain integration.

Currently, the E-governance is getting more attention in the blockchain roadmap. That’s, Some of the applications has its national identity system as Aadhaar. Of course, it’s an eSign public key infrastructure and has a Digilocker citizen cloud hosting solution.

Furthermore, It notes the Hyperledger Fabric and the R3 Corda as some of the networks it benefits from.

So, The document declares that the blockchain application will lead beyond e-governance,

“subsequently, the transition should be made to incorporate various use cases beyond e-governance,…”
“and the framework would be open for anyone to use.”
Lately, The India central government is currently preparing to regulate the crypto sector.

India’s CryptoTech sector expected to grow to USD 241 million by...

Bitcoin Payment Options Goes Active On Verifone For US Merchants

Bitcoin, Ethereum, and other cryptocurrencies may soon be supported by Twitter’s...