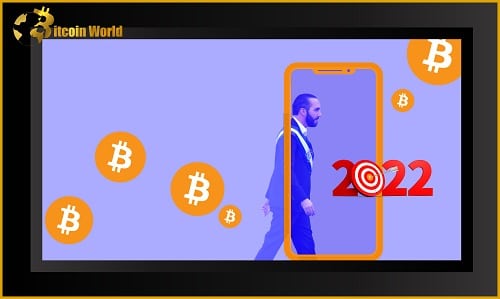 Enigmatic President Nayib Bukele of El Salvador has made some big forecasts for Bitcoin prices and the cryptocurrency industry in 2022.

Nayib Bukele gave six predictions for the next year in a tweet on January 2, beginning with a new all-time high for Bitcoin of $100,000.

To attain that lofty aim, the asset would have to rise 113 percent from current prices of roughly $47,000, but it has the rest of the year to do so. Bitcoin increased by 65 percent in 2021, ending the year at roughly $48,000.
In 2022, Bukele predicts that two more countries will accept Bitcoin as legal cash. When El Salvador adopted BTC legal tender in September 2021, it became the first country to achieve this historic milestone.

Others, such as Turkey, have experienced significant currency depreciation in recent months and may use BTC as a hedge against inflation.

Bitcoin has the potential to influence US elections.

The final forecast made by the Central American President was that Bitcoin will become a major issue in US elections in 2022. On November 8, 2022, all 435 seats in the House of Representatives. Then, and 34 of the 100 seats in the Senate will be contested in mid-term elections.

Both parties include lawmakers who are pro and anti-crypto. But getting over a younger voting base could be crucial to election success.

According to Bukele, development on Bitcoin City will begin in 2022. Because he has complete control over the project, this is quite likely to happen. BeInCrypto revealed in late November that the government has announced the development of a tax-free Bitcoin City, partially funded by government BTC bonds.

The President predicts that these “volcano bonds” will be oversubscribed. In 2022, El Salvador plans to sell $1 billion in crypto bonds. Half of the funds will be used to purchase more Bitcoin. That’s, with the remaining funds going toward geothermal energy and BTC mining infrastructure.

The final prediction was a teaser for a “big surprise” during the Bitcoin 2022 conference in Miami. So, which will take place in early April.

Despite problems about his policies and Bitcoin acceptance, a large majority of Salvadorans approve of Bukele’s government. That’s, according to a poll conducted by a local newspaper’s investigative unit in December.

According to the findings, 85 percent of those polled approve of Nayib Bukele either very much or moderately. Many others outside the country. Just as Steve Hanke, a professor of economics at Johns Hopkins University, are strongly against it.

In Hong Kong, Samsung Asset will float a blockchain ETF

$1 Trillion Market Capitalization For The Largest Cryptocurrency, Bitcoin. After Reclaiming...

DeFi Startup Mound Raises $1.6 Million in a Strategic Investment Round

Cryptocurrency markets gained $80 billion in a single day, with Bitcoin...