THE BEAR VS THE BULL MARKET HYPE 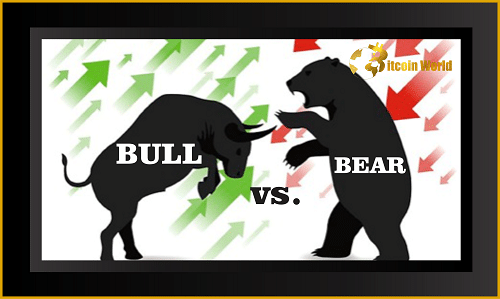 THE BEAR VS THE BULL MARKET HYPE

Over time, the crypto market has been in chaos with the current change in the market trend ‘bear season.” The belief that the crypto market is undergoing recession and as such has generated a lengthy accumulated fall in the price of stocks, downturn for projects, and decline with tokens had led to the question, is the market in a bullish or a bearish season?
In the crypto space, the term “bull” and “bear” are terms used to refer to the conditions of the market. These terms best describe how projects and tokens are doing generally, that’s is; whether they are appreciating or depreciating in value.

A bull market is simplified by a contained raise in price. With the crypto industry as a case study, a bull market would denote a greeny period over which the price of a token is on the rise. In this scenario, investors tend to keep investing and the market keeps accommodating new projects due to a strong economy thereby creating a high employment rate. A bull market occurs when the economy is expanding and the stock market is gaining value.

Idly, the bear market always never lasts as long as the bull market can create buying opportunities for potential investors. The bull market takes effect once there’s a sharp increase in the market price by at least 20% since the last market downturn.

The following underlying factors are the major determinants of how favourable or unfavourable the crypto market is.

#HIGH INFLATION RATE
Inflation would generally mean an increase in the general level of prices. Inflation prices tend to occur in both the bull and the bear markets. High demand for products and services in the bull market can cause an alteration in price resulting in a price spike whereas, shrinking demand in a bear market can trigger deflation.

#GROSS DOMESTIC PRODUCT RATE
Rising GDP depicts a bull market, while a decline in GDP correlates with bear markets. In the stock market, for instance, GDP increases with an increase in companies revenue while a decline in company GDP starts with a sluggish scale and stagnancy in the wage rate.

The key determinant of whether the market is bullish or bearish season is not just the market’s predictable reaction to a particular event, but how it’s performing over the long run. Whether or not there is going to be a bull market or a bear market can only be determined over a long period.