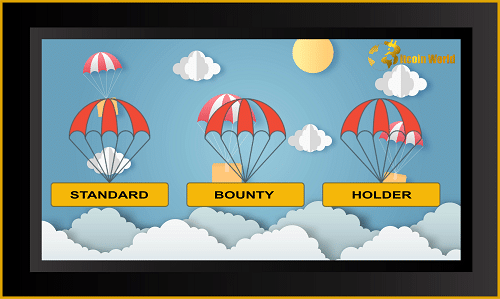 The distribution of virtual currency from a cryptocurrency project to numerous wallets is known as an airdrop. To spread the word about the initiative, coins or tokens will be given out to existing or future users. Although some airdrops demand users to complete certain activities before claiming, these tokens are distributed for free. Crypto airdrops gained popularity during the ICO craze of 2017, and many cryptocurrency ventures are still using them as a marketing tactic today.

We’ve seen that there are various approaches to carrying out a cryptocurrency airdrop. We have a few different kinds of airdrops in addition to the typical one that just distributes cryptocurrency to numerous wallets. Bounty, exclusive, and holder airdrops are typical examples.

Only some wallets are sent cryptocurrency by an exclusive airdrop. The awardees typically have a history with the project, such as being an active part of the community or an early supporter of the initiative.

Decentralized exchange (DEX) Uniswap distributed 400 UNI through airdrop in September 2020 to each wallet that had engaged with their protocol prior to a specific date. Holders of the governance token have the option to cast a vote on future project development decisions.

Free tokens are given away to people who have a particular number of digital currencies in their wallets through holder airdrops. On a specified day and time, the project team often takes a snapshot of users’ crypto holdings. Recipients can claim free tokens in accordance with their holdings at the time of the snapshot if their wallet balance matches the minimal criteria.

Given that they have the largest communities in the space, many new projects airdrop tokens to owners of bitcoin (BTC), ether (ETH), or BSC wallets. As an illustration, in 2016 Stellar Lumens (XLM) airdropped 3 billion XLM to Bitcoin (BTC) holders. This airdrop was only available to users of the Bitcoin network.

Tether responds to WSJ’s concerns about its reserves