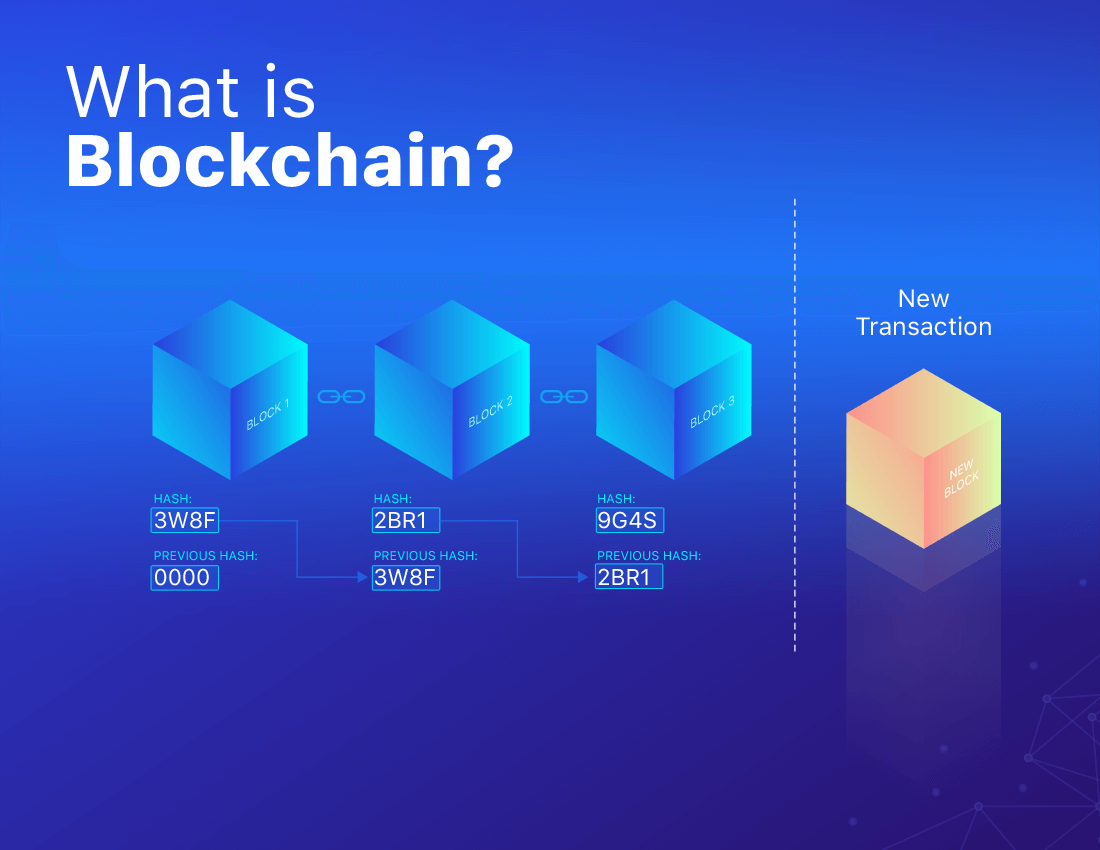 Let’s say you want to transfer money to your family or friends through your bank account. After a successful transaction, the bank will update you about the transaction records. It seems to be simple. What about the safety of your money?

There are chances that the transactions may tamper quickly. People who are aware of this truth are often wary of using these transactions. Hence, the invention of the third-payment applications began. It is here when Blockchain Technology came into existence.

Storing data and transactions are a prominent part of the business. This information is managed by any third parties like brokers, bankers, or lawyers increasing time, cost, or both on the business. Blockchain Technology is a distributed ledger technology that avoids the long process and fastens the transaction processing. Hence, it saves both time and money.

Let’s understand what is blockchain, how it works, and much more.

What is Blockchain Technology?

Blockchain is a structure that stores various data in a way that makes it difficult or impossible to change, hack, or cheat the system. Blockchain Technology supports various applications related to finance, supply chain, manufacturing, etc. Bitcoin is a popular cryptocurrency that uses Blockchain to secure its transactions.

The information is stored in the blocks of chains connected through peer-to-peer nodes. Such a storage system is called ‘digital ledger’. The owner has authority over every transaction in this ledger. The information in the ledger is safe and highly secure.

To make it simpler, let’s consider the digital ledger as a Google spreadsheet shared among various computers. The records are stored based on actual purchases. In this way, anybody with access can see the data, but they cannot corrupt it.

How does Blockchain Technology work?

Blockchain Technology is a combination of three technologies:

Cryptography keys are the Private Key and Public Key. These keys assist successful transactions between two parties. Each user will have these two keys which will help them present a secure digital identity reference. This secured identity is called the digital signature. This signature authorizes and controls the transactions.

A large number of people in the peer-to-peer network use a digital signature to achieve consensus on transactions. When an individual authorizes a deal, it is authenticated by a mathematical verification. It will generate a successful secured transaction between the two parties. Hence, Blockchain users employ cryptography keys to perform various digital interactions over the P2P network.

How to perform Blockchain transactions?

One of the unique features of Blockchain technology is the way it confirms and authorizes the transactions. Let’s consider a scenario wherein two individuals will perform a transaction with a private key and public respectively. The first person will attach the transaction information to the public key of the second person. Total information is gathered into a block.

This block will have a digital signature, a timestamp, and other important information. The block will not contain any identities of the individuals involved in the transaction. The block is transmitted through all the network nodes and when the right individual with the correct private key will match the block, the transaction will be completed successfully. In the case of conducting financial transactions, Blockchain can also store transactional details of properties, vehicles, etc.

The encrypted information is called hash encryption. This hash is transmitted across the world and then added to the Blockchain after successful verification. With the use of the SHA256 algorithm, it is impossible to hack the hash encryption. In fact, it simplifies the sender and receiver’s authentication.

Each block of the blockchain has four main headers:

Previous Hash: This hash address is responsible to locate the previous block.

Transaction Details: It is all the transaction information that needs to occur.

Nonce: Nonce is an arbitrary number in cryptography which helps to differentiate the block’s hash address.

Hash Address of the block: All the three headers are transferred through a hashing algorithm. The output generated will be a 256-bit, 64 character length value, called the unique ‘hash address’. It is called the hash of the block.

The process of adding transactional details to the digital ledger is called mining. Miners use a simple computer to solve complex mathematical equations to find a nonce that generates a hash. A nonce is only 32 bits and a hash is 256 bits.

Ultimately there are roughly four billion nonce-hash combinations that should be mined before reaching the right one. At this point, the miner will find the “golden nonce” and the block is successfully added to the chain.

Any change to any block earlier will require re-mining the current block as well as the blocks that come after them. After successful mining of the block, the change is accepted by all nodes on the network and the miner will get rewards.

Blockchains operate in various ways which involve the use of different mechanisms to secure the transactions, data is visible only to the authorized users and not everyone. Bitcoin is the best example to represent Blockchain Technology. Analyzing the potential of blockchain technology, it is clear that Blockchain will bring the revolution.

What is Cryptocurrency Mining?