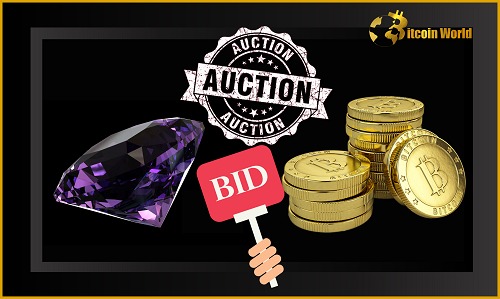 In the next months, a rare black diamond from the farthest reaches of the universe will be auctioned. Sotheby’s, an online auction company, has announced that buyers will be able to pay with cryptocurrencies.

The stone, known as “The Enigma,” is a rare 555-carat black diamond. It’s remained in the same collection for nearly two decades. At a Sotheby’s auction in Dubai, the jewel is projected to sell for between US$4.1 million to US$6.8 million.

Backstory on a rare black diamond

The insanely stunning and rare black diamond has a long and illustrious history. It was named the world’s largest and most spectacular black natural-color diamond by the Gemological Institute of America and Gübelin, a Swiss gem house, in 2004.

According to the Guinness Book of World Records, it was recognized as the world’s largest cut diamond two years later, in 2006.

A naturally faceted black diamond of this size, according to Sotheby’s, is exceptionally rare. “Its origins are shrouded in mystery — it’s said to have been formed by a meteoric impact or to have come from a diamond-bearing asteroid colliding with Earth.”

Between January 17th and 20th, it will be on exhibit for the first time in Dubai. It then travels to Los Angeles, where it will be on display from January 24 to January 26. Then it’s off to London from February 2nd through February 9th, with online bidding beginning in February.

So, The diamond is 555.55 carats in weight and has 55 facets. Also, The human hand serves as inspiration for the design. Lastly, It is an emblem of the Kamsa palm in the Middle East. Then, Its purpose is to provide strength and protection.

Trading Volume for TRON (TRX) Drops to a Quarterly Low of...

As Bitcoin drops to a 17-day low, the cryptocurrency market cap...

The CEO of Celsius Network predicts that Ethereum will hit a...

Temasek is leading a $200 million fundraising round for crypto startup...

Crypto donations will no longer be accepted by the Wikimedia Foundation