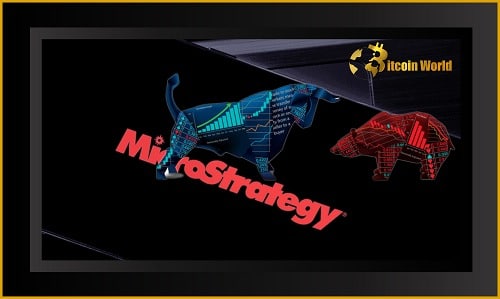 MicroStrategy’s stock price has dropped dramatically during the last few days. On Wednesday, it finished at $168, down 45 percent from the previous week.

Michael Saylor and MicroStrategy are both cryptocurrency enthusiasts. MicroStrategy became the first firm to purchase bitcoin on its balance sheet in August 2020. It’s a better asset for a treasury, according to Saylor, than other currencies.

The issue with the dollar, according to Saylor, is monetary policy expansion and inflation, both of which have a negative impact on purchasing power.

MicroStrategy has declared that it will continue to buy bitcoin in the long run, regardless of its price fluctuations. MicroStrategy CEO Saylor stated in an interview that the company’s objective is to build its business software division while also investing in bitcoin. He also mentioned that the corporation saves its excess cash flows for the long run.

Microstrategy now has a loan of $205 million and needs a cash reserve of $410 million to stay solvent, according to Michael Saylor, the company’s CEO. Microstrategy can now pledge or collateralize its assets using its cash reserve. The corporation can potentially add more cash to its balance sheet if the price of Bitcoin falls below $3,600.

Despite being one of the largest Bitcoin holding firms on the open market, Microstrategy is still one of the most risky Bitcoin investments. Despite the price volatility of Bitcoin, Saylor has no plans to liquidate his company’s Bitcoin assets anytime soon.

Tesla indicated that its move to invest in bitcoin was made to boost liquidity and provide greater flexibility to its stockholders.

NFT Of The World Wide Web’s Source Code, Gets Sold For...