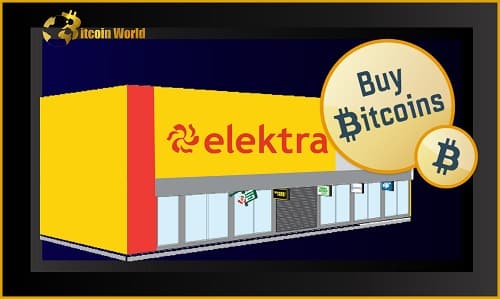 Ricardo Salinas Pliego, the president of the Salinas Group and one of Mexico’s wealthiest men, has discussed the potential of selling bitcoin in his well-known Elektra Group department stores. The comments were made in a recent Tiktok video, in which Salinas discussed the difficulty of including bitcoin in various services due to Bank of Mexico rules. Salinas had this to say about it:

“The issue with the Banco Azteca app is that the regulatory pundits won’t let us,”

” the Bank of Mexico won’t let us, but they’re all of them. The Ministry of Finance, “

“the National Banking Commission… the government officials won’t let us.”

These institutions do not like bitcoin, according to Salinas, and they are obligated to follow the laws until the restrictions change.

Later in the video, Salinas says that Elektra Group retailers will be able to offer bitcoin as items. This is due to the fact that they are exempt from banking rules and do not have to protect their investors’ funds. The executive went on to say:

“Elektra, being a commercial entity, is not regulated by banking authorities, it does not collect money”

“and it does not have that problem of having to protect people’s deposits.”

“Elektra can sell bitcoin as any merchandise, as it was a bike or a phone.”

Salinas Pliego has been a long-time advocate of bitcoin. Last June, the CEO suggested buying bitcoin, claiming that the asset had unique features.

At the same time, he announced that his bank, Banco Azteca, was working to become Mexico’s first financial institution to accept and offer bitcoin-based financial services. However, Mexico’s Finance Minister, Arturo Herrera, promptly responded to these plans. Then, stating that the usage of cryptocurrency was not permitted under current financial system regulations in Mexico.

Ethereum Could Rally to $3.5K, but It Isn’t Over Yet