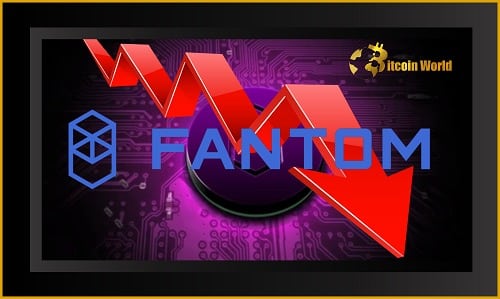 The native cryptocurrency on the namesake blockchain, Fantom (FTM), dropped dramatically when one of its main DeFi exchanges (DEX) was hacked.

FTM has dropped nearly 15% in the last 24 hours and is now trading at $0.322552, a nine-month low. Following Saturday’s losses, the token’s value has more than halved this week, following a devastating crypto meltdown.

One of Fantom’s largest DeFi exchanges, SpiritSwap, reported its site had been hacked. Although the platform had to halt operations to prevent additional theft, it said roughly $18,000 had been stolen.

As of press time, SpiritSwap is still not processing transactions.

FTM has been hacked four times in three months.

While the attack against SpiritSwap looks to be small in scale, it is Fantom’s fourth significant hack in three months. Deus Finance was hit by a flash loan vulnerability in April, costing the platform roughly $13 million.

In March, Deus was also exploited. Another FTM-based protocol, Fantasm, had previously suffered a $2.6 million loss due to an exploit.

Investor confidence in FTM has been significantly shaken as a result of the series of hacks, with the token now down 86 percent in 2022. FTM has registered severe losses on every hack, just as its price reaction on Saturday.

The SpiritSwap hack is part of a larger scheme.

This week, SpiritSwap wasn’t the only project targeted. Several significant crypto projects appear to have been compromised via a vulnerability in domain hosting provider Godaddy.

DEX QuickSwap, a polygon-based game, was one of the more noteworthy losses. To prevent any further funds from being stolen, the exchange has temporarily halted swaps. However, it stated that user funds and liquidity pools are secure.

Kiss frontman Gene Simmons on shilling Cardano and other cryptocurrencies

Although Trudeau has revoked the powers granted by the Emergency Act,...