Tether is flipped on the Ethereum network by USDC 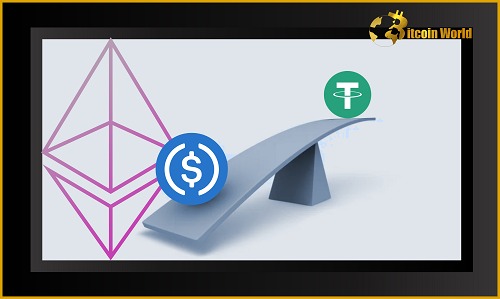 Circle’s USD Coin (USDC) has surpassed Tether (USDT) in total supply on the Ethereum network, marking a huge milestone. As of this writing, USDC has a supply of 40.06 billion tokens on Ethereum. That’s, barely ahead of USDT’s supply of 39.82 billion. Tether has been the most popular stablecoin since at least 2016, when it

As of this writing, USDC has a supply of 40.06 billion tokens on Ethereum. That’s, barely ahead of USDT’s supply of 39.82 billion.

Tether has been the most popular stablecoin since at least 2016, when it started in late 2014. Then, and shared the market with BitUSD and NuBits (USNBT) stablecoins.

USDT was running on Omni at the time. As the latter two faded into oblivion as a result of losing their dollar peg and losing USDC. Whereby, emerged in 2018 as a more transparent and regulated rival to Tether, which has been dogged by questions about its backing for years.

Although USDT is still the most popular stablecoin, with a total supply of 78.5 billion. That’s, Tron has roughly half of the supply, or 38.7 billion tokens. USDT can also be found on 13 other chains or layer 2 solutions, including BSC, Solana, Huobi ECO Chain, Avalanche, Polygon, and 13 others.

USDC currently has a total quantity of 45.7 coins spread across 21 chains or layer-two solutions.

Tether’s public image has deteriorated over time due to doubts about its backing. The corporation has been dogged by controversy concerning the collateralization of the stablecoin and the management of its reserve money.

The publication of two Consolidated Reserves Reports by accounting firm Moore Cayman about Tether’s financial reserves in 2021 did little to assuage the doubters.

Tether reported in its most recent financial report that it has $30.8 billion in unspecified commercial paper in addition to other assets backing USDT.

Circle has been more open about its reserves, but not to the extent that some opponents have demanded. Coinbase President Emilie Choi stated in August 2021 that the USDC reserves backing the market’s second largest stablecoin would be fully made up of cash and US Treasury bonds. According to a Grant Thornton Independent Accountant’s Report, this occurred by October 27, 2021.

Coinbase is a close partner of Circle, a digital payments company that assisted in the introduction of USDC in October 2018. Bitmain, China Everbright Bank, and eight other companies have invested in Circle.

It has backed efforts to create a unified regulatory framework for all stablecoins. Circle CEO Jeremy Allaire backed a proposal from the Biden administration in November 2021 to treat stablecoin issuers like banks. In December 2021, Allaire met with other key crypto sector experts at a Congressional hearing. So, to discuss policy direction with the Financial Services Committee.

Stablecoins with a central authority The top three stablecoins are now USDT, USDC. Then, and BUSD, however decentralized stablecoin choices have begun to proliferate.