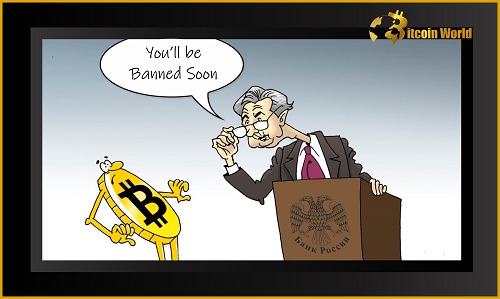 In a paper titled “Cryptocurrencies: Trends, Risks, and Measures,” the Russian Central Bank advocates for a blanket ban on all crypto operations. The document was released this week, and through March 1st, the regulator is accepting comments and ideas on its contents.

The Central Bank of Russia (CBR) notes in the report the worldwide crypto market’s rapid expansion over the last year. Then, as well as Russians’ annual $5 billion in crypto transactions.

The central bank stated that speculative demand is driving the rise in value of cryptocurrencies, which is building a bubble. The properties of cryptocurrency are similar to those of a financial pyramid.

It claims that their spread poses a threat to Russia’s financial system, monetary policy sovereignty, and citizens’ well-being.

In the next months, the Bank of Russia plans to work with the Russian government. Then, and parliament on a number of suggested legislation modifications to lessen these concerns and the possibility of criminal conduct.

“monetary surrogates” that are illegal under Russian legislation.

So, It now seeks to prohibit their issuance and circulation in the Russian economy. Of course, which would include cryptocurrency exchanges and peer-to-peer systems.

The central bank has also spoken out against crypto investments, stating that financial institutions will be prohibited from investing in cryptocurrencies and crypto-based financial instruments.

The central bank believes that cryptocurrency transactions should not be facilitated by Russian financial infrastructure or middlemen. Crypto mining’s current magnitude and spread, according to the authority, might pose serious environmental and energy supply issues.

Bank of Jamaica will launch the digital Jamaican dollar in 2022

If India can land on a Pro-Crypto policy, are there chances...

Uruguay is said to have the world’s first cryptocurrency ATM

NFTs: The new technique for Indian artists to monetize their work.