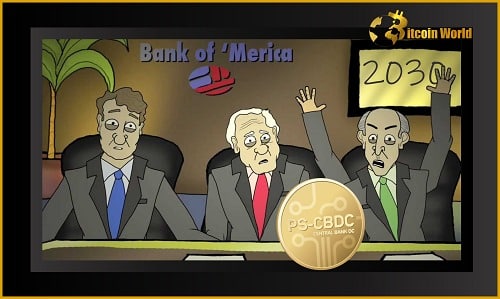 Despite the fact that the US government continues to toy with the notion of releasing its own central bank digital currency, the Bank of America feels it is “inevitable.” Furthermore, analysts from a prominent banking organization believe that stablecoins will continue to thrive and play a significant part in the monetary system.

CBDCs are becoming more popular among central banks, with many announcing plans to launch them. Only a small percentage of countries have digital versions of their national currencies. The US, on the other hand, has always appeared to be behind the curve, with Fed Chair Jerome Powell arguing that the country must do things correctly rather than first.

Furthermore, the world’s greatest economy believes that the Chinese approach will not work within its borders.

Nonetheless, certain publications say that the US is making progress in determining how to create a CBDC.

According to Bank of America, such a product will be available in the United States between 2025 and 2030. Bloomberg said that CBDCs “are an inevitable progression of today’s electronic currencies,” citing bank analysts Alkesh Shah and Andrew Moss.

Last week, the Federal Reserve released a paper that looked at the benefits and drawbacks of a central bank digital currency. According to the report, this might lead to faster settlements and lower transaction costs. CBDCs, on the other hand, may jeopardize people’s privacy by allowing governments to monitor and control the issuance and transactions.

Only Millionaires can trade Bitcoin in Hong Kong.

Cameron Chell adds Motoclub and MusicFX to his NFT portfolio